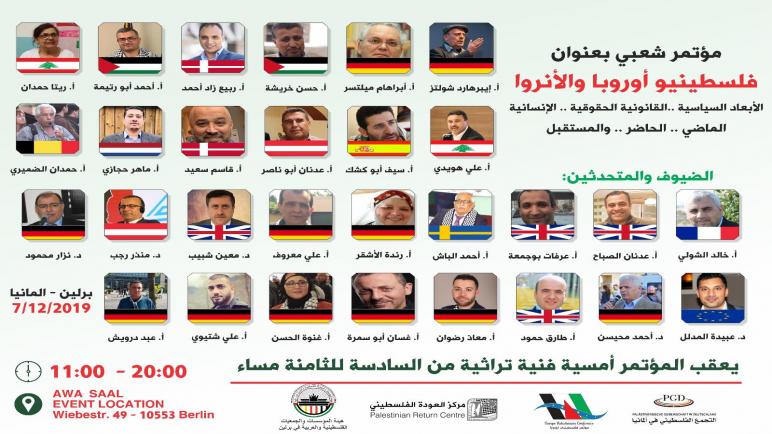 Palestinian and European Expert and Academics from different European countries will take part in the conference to enrich the discussion on UNRWA future through expert papers that examine its past, present and future.

The conference aims to support UNRWA’s work and the persistent causes for its existence since the early beginning of the Palestinian Nakba. It also examines the “sole” America and Israel opposition of the adoption of the UN General Assembly which won the support of 170 countries.

Holding the conference in Berlin is significant and symbolic and in line with the German Foreign Policy on UNRWA through constant funding which was clear throughout its support to the latest UN resolutions.

The conference program, which runs from 11:00 am until 20:00 pm, will be distributed in three phases, as the opening ceremony of the conference speeches from the organizing institutions in addition to the participations of the conference guests, in which Mr. Hassan Khreisheh, Vice-President of the Palestinian Legislative Council speaks and journalist and German publisher, Mr. Abraham Melzer, German lawyer for human rights, Mr. Ebahard Schultz, Mr. Rabiezad Ahmed, the deputy mayor of Ugg municipality in Denmark, and Rita Hamdan, the president of the Norwegian People’s Aid Society for Relief and Development.

This will be followed by three consecutive seminars in which 12 professors, researchers, attorneys, and academics will participate, spread over 12 different European countries. These three seminars will discuss the political, legal, and humanitarian dimensions of UNRWA’s past experience and its current reality, and will explore its future prospects as well as examine the presented papers. UNRWA’s work tracks, with its Palestinian, Arab and international dimensions, and the harassment it faces from the Israeli occupation

These papers and seminars aim to draw a set of recommendations and plans that will enhance the recent UN General Assembly resolution As usual, the Palestinian people carry their heritage and popular folklore with it.

The conference is part of a series of activities carried out by Palestinians on the continent as allowed by European laws in the framework of renouncing all forms of racism, hatred, incitement, anti-all religions, including Islam, Christianity, Judaism and anti-Semitism.

For More Information and Media Interviews